A new study by the Center for Disease Control found just over 30% of fatal car wrecks from 2009-2014 involving teen drivers [aged 16-17] occurred between 9 PM and 6AM. A whopping 57% of those accidents occurred BEFORE Midnight. This calls into the question the practice of many states which while they do limit teen night-time driving, do so only AFTER Midnight.

Now, some may go “Well that’s peak driving time, after school, weeknights and weekends”. That’s true to a point but let’s examine the idea further: kids who have been up since 6 AM, in school all day, are having most of their fatal car crashes while they’ve been up and about in the range of 15-18 hours already. There have been countless studies on teens needing more sleep, how their brains haven’t reach maturity yet, and to boot these kids are relatively inexperienced drivers. Putting those factors together is a dangerous combination.

49 of 50 states in the U.S. have restrictions on teen nighttime driving [Vermont, you’re on the way wrong side of this issue]. However, only 23 of those states actually limit driving before midnight. Driving at night puts one at elevated risk for a crash regardless of age but more the young, inexperienced driver who is less adept to challenges they may find on the road. Data in the study provided by the National Highway Traffic Safety Administration [NHTSA] found 93% of the nearly three and half billion teen night driving trips ended before midnight based on their 2009 data.

The unfortunate and obvious observation to all this is, we’re letting our children drive when they’re most vulnerable. So what can be done? For one, night-time driving needs to become a larger requirement of Drivers Ed Behind-the-Wheel training. Many states require a much higher percentage of daytime practice driving than at night. If we’re going to keep restrictions where they are now, then DMVs have a responsibility to update their standards to include many more hours of nighttime practice driving a parent or licensed adult. This is a must if we are to keep thing as we are.

Others will say restrictions should begin even earlier; that we should limit our teens at so they can’t drive past dark. Dusk can be an incredibly dangerous time as well, with varying visibility levels and the sun is low enough that it can be blinding. Again, that leads to another problem of sort of coddling kids from preventing them from driving at night at all.  You then end up with night driving as almost a totally foreign environment when drivers do move past a night-time driving restriction once they get older. Not a good answer either.

I advocate more of a middle of the road approach to this. Night Driving Restrictions should be moved down to around 9-10 PM. Kids shouldn’t be out later in a car than you would’ve wanted them running or biking around the neighborhood at night. Most of the same fears we have for our children are still a valid concern anyway, a car as the means of transportation doesn’t take away those worries. It just might be adding to it.

For the night driving restrictions in your state, see this cool map from the Insurance Institute for Highway Safety:

And again, for a great online Teen Drivers Ed course with fantastic material on night driving, I recommend DriversEd.com 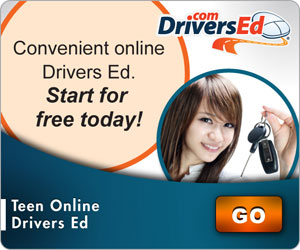